The type of console configuration is 20/8/2 - in other words 20 input channels, 4 auxiliary channels and 1 Master stereo channel.

The layout and graphical interface are made to resemble a traditional mixer, which makes operations extremely easy and intuitive, even for novice users.

If necessary these channels can be coupled in stereo mode.

These are stereo channels dedicated to VST instruments - hence they don’t feature audio inputs.  Software effects can be activated in the channels’ Inserts, to process signals from software instruments.

This stereo channel is fed by the digital audio player integrated in the console. As with the other channels, audio signals can be processed by software effects activated in its VST Inserts. It is also possible to activate VST instruments in these inserts.

These four stereo channels receive signals sent from each Audio/VST, VST and Player channel via auxiliary sends 1-4 (and their panpots). These can be used to activate software effects in common with any channel, or for custom channel monitoring. It is also possible to activate VST instruments in these these channels’ inserts.

Usually this channel receives signals from every console's channel, and is used for global adjustments. In its Insert Slots are activated software effects to be applied to signals mix, and, when needed, VST instruments can be activated too.

Every channel in the console features these items:

There are 4 Inserts for VST effects and instruments, that can be connected in series, in parallel or a combination of both - as explained at the VST Player page.

It is remarkable that AudioStation Inserts operate in stereo even with mono signals.

Actually, mono signals are split in a way that we named “pseudo-stereo”, to apply stereo effects even to mono instruments.

There is a 3-band parametric EQ, each band with adjustable: gain (+/-4dB); frequency (from 20 to 20K Hz); Q-factor; hi-lo shelving and peaking filter switches.

There is a 75Hz 12dB/Oct hi-pass filter too, useful to suppress stage noises.

There are 4 auxiliary sends (Aux), each one sporting a panpot, Pre/Post Fader selector, and Bypass.

Thanks to the stereo mode and panpot knob, there are actually 8 separate Aux buses available.

Each channel has a panpot; volume, with adjustable automatic fadeout; selectable channel audio out, that can be routed to master or individual outs.

There is a level indicator, with range adjustable between -48 and -96dB, visualization mode as Peaking or RMS, and LED Clip.

In addition to the features described , every console channel has important additional items as follows:

Beyond the possibility to assign to any single mixer channel one or more MIDI Ins/Outs, every channel is equipped with a powerful MIDI patchbay, sporting an advanced routing and processing system, to route streams to plugins as needed.

Details are available at the MIDI Patchbay page.

As detailed at the VST Player page, and separately for each VST Insert, there is a sophisticated system to control the plugins’ automated parameters in real-time with any kind of MIDI controller.

More details are available at the VST Player page.

An important operational aspect of the AudioStation digital mixer is the possibility to independently save each channel’s settings (channel patches), channel patch combinations together with general console settings (performances), and their use in live sessions.

Just like a synthesizer or an effect unit, any mixer channel (including the Aux ones) holds a good 1000 memory locations to store and instantly recall its settings, including MIDI routing and mapping, and whatever combination of instruments, sounds and effects it uses.

Along with each patch, plugin preset banks are saved as well. This ensures that patches will work seamlessly even in those cases where some presets are substituted with others.

This specific operational mode allows, for instance, to set specific performances for each song. When a performance gets loaded, it loads in each mixer channel the patches chosen by every musician, along with global effects, settings for monitoring and any audio track to be played.

At any time during the performance and in a completely independent way, each musician will be free to load different patches - for example, to perform a solo or other.

For a better transition between scenes, when a new performance is loaded it replaces only patches different from the ones being used. This way, channels that don’t need changes will continue to work seamlessly.

The preload function reduces patch loading times to zero. It is most useful with very complex setups or with the so-called Sample Player plugins, that use libraries of very large audio samples. While a patch is being used, another one can be loaded in memory and then activated at the right time, without delays.

Patches and performance can be comfortably selected with LiveControl (the handy remote controller included in AudioStation) or via MIDI.

With LiveControl it is extremely easy to recall performances and channel patches.

Selection is made easier by two buttons, Prev and Next, which directly recall the previous and next setup.

The desired setup is chosen by means of those buttons and the Data knob - even when another one is in use - and loaded at the right time with a simple click. 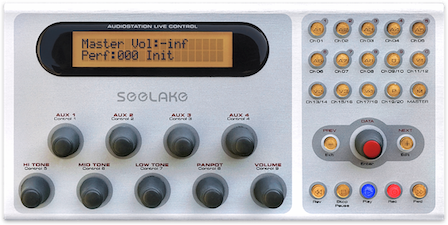 Any musician connected to the console can change patches for his channels and performances with his own master keyboard, a foot controller or any other kind of MIDI controller.

Like in a synthesizer or an effect unit, every channel of the AudioStation mixer responds to Program Change and Bank Change MIDI messages. A single program change or a combination of bank and program change determines which patch or performance to recall, and the MIDI channel 1-16 determines which mixer channel will be targeted.

Hence, independently from global and channel MIDI routing settings, performances and channel patches can be changed from any available MIDI input.

Moreover, when two or more channels are used together to create a more complex setup, they can be grouped together and recall their patches with a single command.