The mixing console also embeds an useful and practical digital audio player/recorder with which to playback multitrack or stereo backing tracks and record performance, together with software instruments and effects.
The player/recorder allows to: 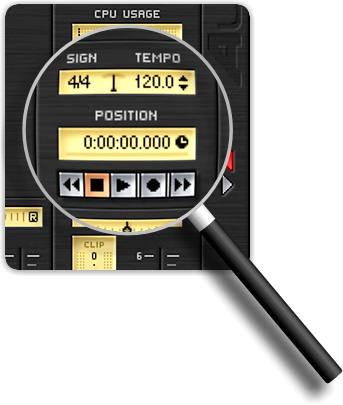 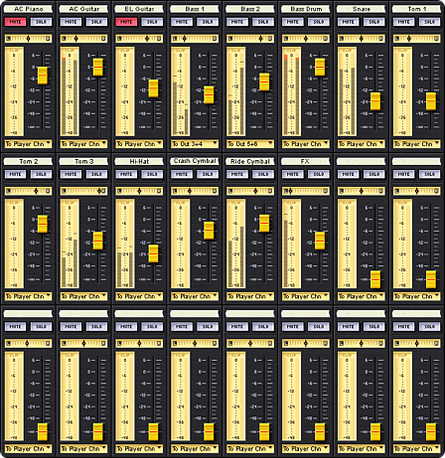 An apposite sub-mixer is included to give more versatility in managing multitrack backing songs, with whom adjust, separately for each track:

The submixer thus allows to manage the mix of any backing track to fit your own needs.
For example, you can save many version of the same song, and use them according to the place, the type of performance or the band arrangement.
The assignable audio output allows to send the tracks to individual hardware outputs or to the mixing console channel dedicated to the digital audio player.
This way, one or more tracks can be sent for example to the drummer only or to the global mixing console (the Front Of House).
Sending tracks to the player channel permits to process songs with EQ and appropriate VST effects (limiter, compressor, reverb or even creative effects like filtesrs, bit reductors or the like). This option also allows to perform on the tracks mix the automatic fadeout like described in Digital Mixer and LiveControl pages.

Playback starts immediately and in perfect sync with Play button click. For simpler operations there is the AutoPlay function, that starts playback automatically as soon as the backing song is loaded in memory. If needed, playback can be looped too.

Controlling songs playback live is really easy: actually, like detailed in its page, LiveControl (the remote controller supplied with the device) features a group of dedicated buttons.

Additionally, play and stop can be controlled via MIDI too.
On the other hand, recording is totally independent from the playback. For example, recording can be activated first and then, at the right time, playback can be started. Or otherwise the playback can be started first and then the recording. The AutoSave function can be used live, to simplify operations and automatically save recordings.

The channel patches of the console audio player channel store any information about the backing song to be played.

Hence, to load in memory a song with LiveControl you simply select the audio player channel, and, as described in LiveControl page, select the patch (in this case the song) by rotating the Data knob, and finally click on the knob to load the patch.

Alternatively, you can use channel selection buttons to enter directly the song number, or browse the songs back and forth with Next (+) and Prev (-) buttons.

While a song is playing you can choose another one and, at the right time, load it in memory simply with a click.
Another way to load a song in memory is to activate a performance (a scene of the whole console) whose settings include backing tracks. Then, during the performance, if needed and with no need to edit the active setup, you can play other songs afterwards. Thanks to the Integral Sync system, the console BPM (and therefore the BPM of plugins in use) will adapt from time to time to the BPM of the active song.

Like explained in the Digital Mixer page, patches (in this case, songs) can also be selected via MIDI, other than with LiveControl.

Like read in VST Player page, AudioStation includes ad adjustable Master tempo generator, that undertakes the sync between console, plugins and external MIDI devices. The same sync is also used by the audio player/recorder and to generate audio/MIDI click.

In the dedicated display you can properly adjust Signature values, using either regular or irregular divisions, and Tempo, with values ranging from 0.1 to 240 BPM.

Another display shows the reference to the location of the playhead and/or the recording head, in Time or Measure format.

The Player/Recorder section includes a handy audio/MIDI click generator, useful to play in time with songs, but also with grooves and sequences generated by plugins or external MIDI devices synchronized with AudioStation. Of course, it can be used to record too, or simply to play in time without a backing song.
Audio and MIDI click can be run at the sime time. In particular: 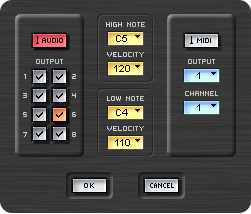 For both you can adjust pitch and volume of the first and the following clicks in measure, separately. These settings are saved in the patches of the player-dedicated channel and/or in the performances (the scenes of the whole console). This way every song and every setup have their proper settings.